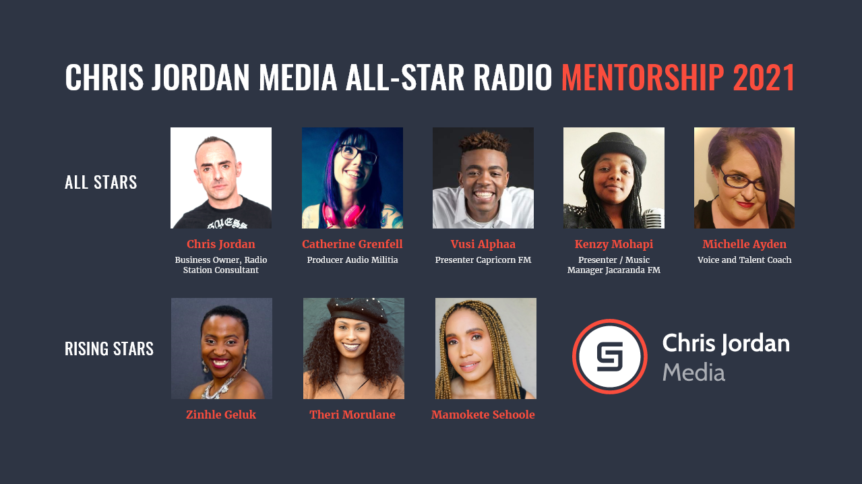 2021 sees the first year of a first in South Africa.

Chris Jordan Media will bring broadcasting veterans together that will reach out to mentor 3 immaculately talented rising stars.

Chris said, “I got tired of waiting for stations around the country to step up and take full mentorship roles for our next generation of broadcasting practitioners.  So, I made some calls, interviewed some candidates, and made this initiative happen.  The radio industry is small in South Africa, but, it is also like a “clique”, which pushes away the growth of new talent

We look at a lot of commercial stations who should be running training slots for well skilled community broadcasters, but instead automate those slots?

It makes no sense.  Whatever the semantics may be.

With this initiative, we want to mentor rising stars in all aspects of being greater than just a voice behind a mic.  From brand identity, to social media presence to content creation, to voice training, to community giveback  – we are going to give these girls the whole package.  And they will over the next build solid infrastructures of presence and industry offerings that are going to rival the best in upcoming new talent”

This 12 month mentorship will allow the 3 rising stars to have access to the insights and guidance from the following:

Chris has also been an entertainment journalist/presenter on eTV’s Morning Live for 4 years.

Chris also moonlight’s in the Corporate Training arena. Having a BSc in Computer Science and BComm (Hons) in Informatics, he has diversified training experience from ICT skills to being a Google accredited specialist in G-Suite, Google Cloud Platform, and in Applied Digital Platform Skills, to high end and SETA Accreditation training in Project Management, Corporate Communication, and Leadership skills.

Catherine joined 5FM as a producer in 2001 following several years in the live arena (she studied lighting, sound and stage management). She has worked with Mark Gillman, DJ Fresh and Warrick Stock (the Shady Lurker) as a producer on their shows as well as doingTraffic. She also had her own Live show on 5FM, with a live band and live studio audience.

In 2016, Catherine decided to leave 5FM and start a new adventure, freelancing as a radio and field producer and social media content director. Catherine was also involved as the Program Manager and Presenter on a new internet radio station called The Eye. Catherine was also a lecturer at Boston Media House for 5 years, where she taught Radio Theory. Teaching has become a huge passion in Catherine’s life and it is very important that she shares her knowledge and helps pave the way for new talent. Catherine started as Head Producer at Audio Militia in 2018 (An all-encompassing Music Agency) and has found her happy place with this amazing team.

Her love of great music, both South African and international, has given her the opportunity to travel to different music festivals around South Africa and the World. Catherine has extended her love of music to DJ’ing and plays a wide variety of genres from Rock, Deep House, Electro House, Pop, Kwaito and Amapiano. Catherine has MC’d many festivals and corporate events, including SAMA’s, Oppikoppi, Mieliepop. Rocking The Daisies, Synergy, Lush Festival as well as School graduations and the IAB 2018 Digital Summit.

Catherine has been a judge for The South African Music Awards for the past 8 years. Alongside her music, Catherine’s adventurous spirit has seen her undertake many escapades, all in the name of great radio. This adventurous rock chick has bungee jumped off the world’s highest bungee bridge, shark-cage dived, abseiled and driven in an off road rally car.

On a more serious note, Catherine’s charity involvement is something she feels as passionate about as the music. As a mother, she’s no stranger to the challenges facing contemporary society and she has been involved in many charity initiatives. She climbed to the top of Kilimanjaro for a charity organization called The Lonely Road Foundation.

Catherine is also an Ambassador for The Children’s Radio Foundation and WWF SASSI. Catherine has also recently become involved in Operation Smile, which is an organization she holds very dear to her heart and wants to use her platform to make a difference in people’s lives.

Vusi is also the founder of the independent record label Dope Drip Record; he is a Boston Media House alumni, with a diploma in media practices majoring in Radio.

Vusi started his radio career in 2017 at New Vision Radio: where he hosted numerous radio shows, later joining 1912 online radio in the same year. He then joined a community radio station Vhembe FM in Thohoyandou in 2018 before venturing into commercial radio. Besides being on radio Vusi is a music performer; he has released singles such as #Chakalaka which is a hip-hop song that went Viral; trended number 1 on Twitter, also being covered by News24 as they wrote an article about 5 Positive things that the video.

She’s done work for Coca cola, Telenet, 7delaan , JoziH and Kyknet as an actress . In 2007 she was cast as the controversial Maggie Rossouw on the popular MNET soap Egoli. She also got an awesome opportunity to be part of District 9. That locally shot international film produced by Peter Jackson. Nominated for a  for Best Picture at The Academy Awards 2010!

She’s done many voice overs, recorded a children‘s series onto audio disc and deejayed as a presenter on TUKSFM alongside big names like Chris Jordan and  Anele back in the day.

She has starred in SABC 3 Sketch comedy series, SKETCH YOU LATER, 3 seasons of Thandeka’s Diary, Ayeye and other great shows over a two decade career.

She has appeared as a guest on many talk shows on television and radio.

She now focuses more on coaching talent and her absolute passion is sharing knowledge and skills.

Kenzy Mohapi is a vibrant & talented media professional and entrepreneur who has had a successful 14 year long career.

Kenzy has had a successful radio career behind the mic since the age of 18, having worked at TuksFM, OFM, CapricornFM, and is currently playing her trade at JacarandaFM.

Kenzy has also curated the music programming for three commercial radio stations. Kenzy is currently a radio host and music compiler at JacarandaFM

Zinhle is from Gauteng Joburg. She was born on 5 January 1998. She went to Alberton Primary school, where her love for speaking and the arts was born. She participated in the school’s eisteddford every year. At church she would participate in doing readings and act in plays such as Passion of Christ and casual event plays. In high school she joined public speaking tackling various topics.

She is currently completing her Bachelor of Social Science in Politics and Economics at UCT. When she began her university journey she began MCing at various res events. In 2019 she joined the UCT radio where she received training guarded by the excellent station manager Natilie.

She began doing graveyard shifts shows, later that year moved to prime time talk such as being co-host at Talk @12 and Music brunch show. She also joined the content production where she produced for various other shows. Zinhle also has a bug for writing in 2019 she joined varsity news and wrote thought provoking and informative opinion and feature articles, especially during the 2020 lockdown.

She also has a love for leadership 2019 she was the only independent candidate who gained the most votes for the UCT SRC, having had prior experience with student leadership where her fellow colleagues describe her as an exceptional force who puts her all in what she does.

She is friendly, funny, direct and a humble human-being with a love for people. She is also hard-working, ambitious with the drive to thrive.

Her dream is to be an internationally acclaimed broadcaster, media personality and businesswoman and lead through mentoring others and who knows maybe running a station one-day.

Lovely model & radio personality with an enthusiasm to give listeners an entertaining experience. With over two years experience in radio, my skill-set includes vibrant voice acting, content creation, announcing programme line ups & presenting music. Beyond my passionate persona is my great ability to make use of media and audio mixing consoles. Not only am I swift in learning to operate media mixing technology but I creatively produce on Adobe audio systems & Logic ProX music editing software.

Besides being behind the cameras and the creativity of the mic, is my intellect. I’m a 2x degree holder in psychology plus anthropology & also diligently pursuing my interest in business & financial markets in my role as a top Relationship Associate at an award-winning Forex broker. Last but definitely not least. Campaigning for women empowerment and actively giving back to my community continues to be my greatest priority!

Mamokete has been in the corporate governance sector for over a decade. She studied a short course in radio presenting with Boston Media House. She was a producer for Doughboy Productions. She has spent two years volunteering in Ghana at Sweet Melodies FM as a media officer and voice over artist. She is a poet and an actress. She has acted in a number of theatre productions. She is also an entrepreneur.

So we are off to a great start. All the rising stars have met with their mentors and explored the growth of social media strategies, branding, copywriting, voice over exercises and brainstorming podcast series’.

In my sessions, we focused specifically on social media strategies, brand identity, and podcast conceptualization – and I want to share some general tips with you on these particular areas.

The “Face” of Your Business

For all intents and purposes, your brand’s logo is the “face” of your business. But that face should do more than just look cool or interesting — a logo’s contribution to brand identity is associative, too. It tells the public that [this image] means [the name of your company].

Having a brand identity doesn’t just make your product more memorable; it makes your brand more authoritative in the marketplace. A brand that establishes a face, and maintains that face consistently over time, develops credibility among its competitors and trust among its customers.

A brand identity is a template for everything you would include on an advertisement for your business — whether that ad is in print, online, or a preroll commercial on YouTube. A brand with a face and industry credibility is well prepared to promote itself and make impressions on potential buyers.

When you create an identity for your brand, you’re giving it something to stand for. That, in turn, gives your company a purpose. We all know companies have mission statements, right? Well, you can’t have one without first giving your brand an identity.

A brand identity — one with a face, trust, and a mission — attracts people who agree with what your brand has to offer. But once these people become customers, that same brand identity gives them a sense of belonging. A good product generates customers, but a good brand generates advocates.

If you want your business to become a well-known and beloved brand name, it’s going to take some work. The following steps will help you build a brand identity. They are simple steps; implementing them, however, is another story.

The easiest “Cheat Sheet” for developing a social media strategy is to literally go on Pinterest and search for template calendars for each medium. They look like this.

Bookmark this page to see all the growing efforts of our Rising Stars, Panel discussions with our All-Stars, and a true 1st for South African radio.

Please don’t forget to tag us at www.chrisjordanmedia.net in any posts you make if our journey inspires you to growing on your own path