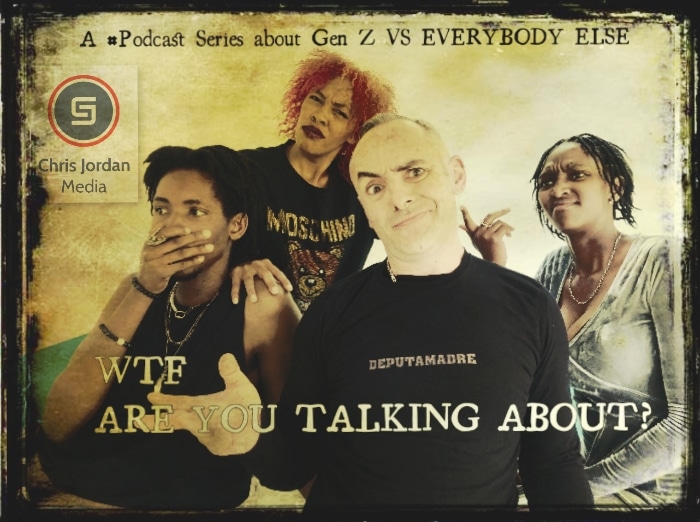 Hi, my name is Chris Jordan and I want to welcome you to this podcast series “WTF Are You Talking about?”

I’ll do a quick synopsis, then you can expect a fluid conversation that continues in 6 episodes with 3 Gen-Z representatives to “officially” bridge some kind of middle ground between a generation misunderstood for their instant gratified life views, and unconventional walks to self-actualization in a world that has segregated a need to collaborate with them moving forward.

Throughout this series, we will make light, of yes, certain aspects of this current socio-political conversation, but only to highlight a more serious note, that this series aims to really find out what is it, that makes Gen Z, such a highly emancipated worldview.

Episode 1 – What Should The World Know …NOW?

In Episode 1, you can expect a “speed dating” intro to each Gen-Z representative, Danae Gucci Lakay, King Christi, and Simply Duma. And then move directly into a conversation that sets the mood for this series with this episode’s particular focus on hypocrisy and generation face-offs.

Episode 2 – Is the Gen Z Voice One We Want to Hear?

In Episode 2, we have the debate of whether Gen Z finding their voice is worth anything the world is interested in listening to. From internal battles to socio-communication, to the battle (and often suffocation from/by) parental or authority figures. Gen Z is unified as a sole act, but collaboration with the rest of the world does not seem to be in their surface plan of action. We chat more about these issues.

I.D.E.A stands for Impatient, Distracted, Entitled, and Apathetic.
In this episode, we go head to head over, well, just getting over it, and getting it done.

The world continues to point fingers at an apathetic Gen Z population that has no interest in a political agenda. But the highest form of hypocritical action is the lack of follow-through the world suffers at the hands of our political leaders. How many of the rest of us can honestly say we don’t feel the same way?

In Episode 5, the team is projecting the holistic nature of the world that has been happier, in being more hateful than ever. Individualism versus downright ignorance and dismissal. Words in a global village have changed and allowed the presence of too many toxic communities that are heightened by the power of screaming and shouting and individual agenda on social media in the digital age.

This 2 part episode will focus on hate, self-hate, and religious blasphemous oppression – all that is adding to the ever-growing nuclear apathy of Gen Z.

In Episode 5 PART 2, we close off the conversation that surrounds hate in this world we live in, whether Gen Z will step up and do something about it, and how it is fuelled by the likes of archaic religious agendas.

We are rounding up our Gen Z/Gen-Everybody Else journey together with the gritty, raw, and frontal attack on self-actualization. The Mid-Mid Life Crisis is a real thing. When a 20-something-year-old, especially, in 2022, is placed within a context of natural growth but is disconnected from the ability how to actually deal with it, Gen-Zers are plagued by depression, anxiety, pressure, and emotional detachment.

This is the final curtain call for our podcast series on digging deep and dirty with Gen Z and their battle against, or the battle with, the rest of the world. I, being a purebred Gen X-er, want to get to the point. When does Gen Z enter the reality of the world around them, and how will they take on the war they are existentially going to face?