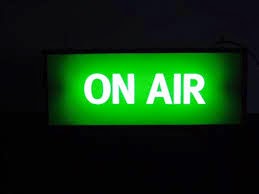 Discussing the show clock goes back to the days
of radio dinosaurs.  Probably the most
used, and most useful tool in radio broadcasting – the show clock will help any
broadcaster (amateur or not) put together a great radio show.
The show clock (or sometimes referred to a “hot
clock”), comes in a number of varied shapes and forms.  The first noticeable difference would be
clocks designed to plan shows across music to talk radio.  The formats are, of course, incredibly
different.  And so the formatics are just as varied.
My discussion begins with the basics of what a
show clock constitutes:
–
A circle indicating 60 minutes of each hour of your show
–
Indicators of
o
Spot (ad/promotion/billboard/live read) breaks
o
Links (features/callouts, callers, guest interviews, generics, admin,
weather, traffic, news and sport), and lastly
o
Music sweeps if there are any, as well as
o
An underlying understanding of where the show is going and how it will
translate effectively on air.
–
One strategically places each of these existing concepts logically into
the “hot clock” to plan each hour.
Okay – now we can begin dissecting the show clock
at its surface level.  It’s not enough to
just randomly place links in between music sweeps and hope for the best.  One has to consider quite a number of things,
such as:
–
Time of day
–
Who is your main listener demographic
–
What is the culture/genre/brief of your show
–
What is it that you are trying to achieve through the show link to
link (is it to be informative, interactive or entertaining?)
Once the “ethos”
of your show is understood – one can start to plan using your show clock
accordingly.
Let’s start easily – with flagship shows that air
weekdays during your breakfast and drive time shifts.  Most of the work as a presenter is done for
you.  Because these shows are so often
heavily loaded with spots, as well as the mandatory traffic, news and sport
updates – presenters of these two shows need to have the ability to work around
what is already insisted upon by station format.
Let’s consider the example below. 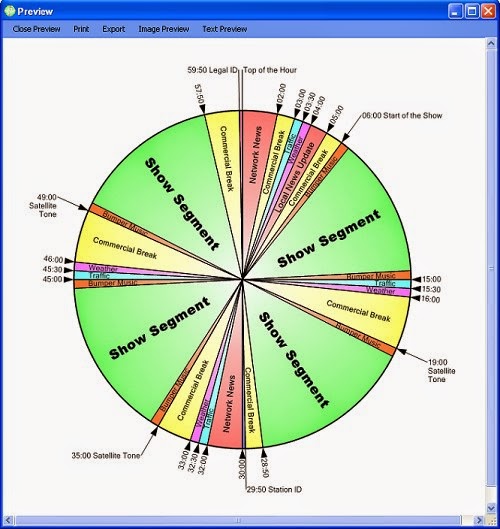 Looks rather busy, doesn’t it?  It should.
At an immediate glance one can see that the above show clock is catered
to an hour from a talk radio show, probably round the mid to lunch time
periods.  Like everything in talk radio,
every second is accounted for – but we will discuss the talk radio format a
little later.
Here is another example where spot brackets are
split over 20 minute intervals.  This is
often commonly used with most national commercial radio stations.
One could consider the A, B, or C segments as
either talk segments or music sweeps. 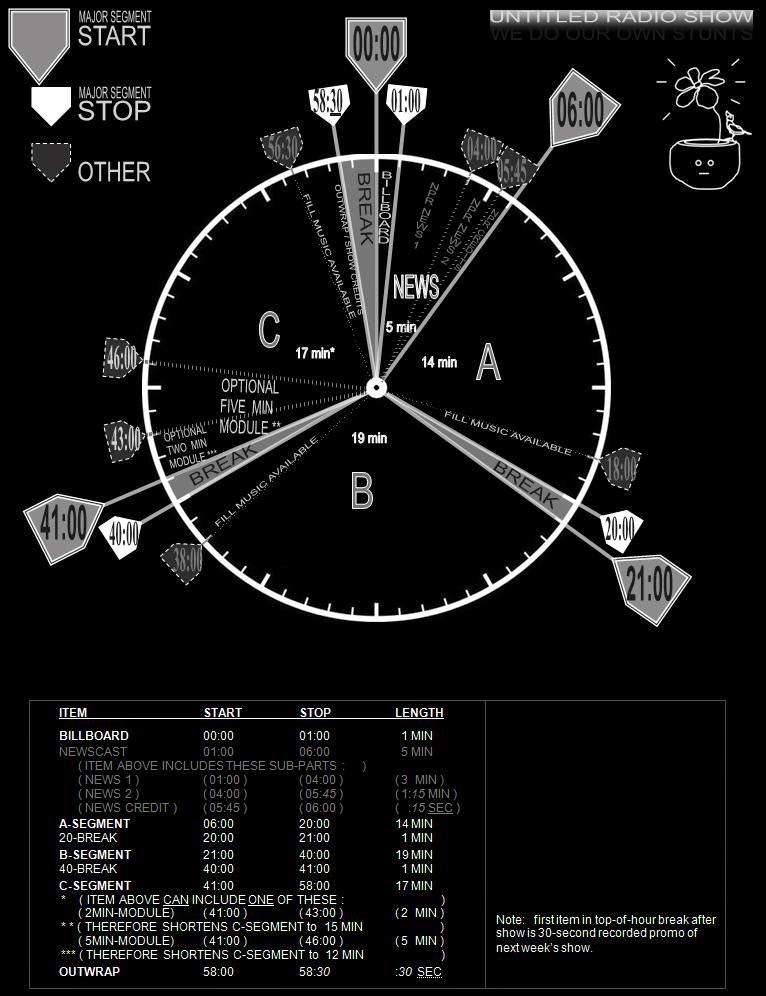 What I like about the show clock below is that it
tries to move generically across shows formats on a particular station.
Compare all 3 (the last presented below) and
develop your own that works for you.
We will revisit putting the show clock together
once more  at a deeper level of
consciousness in the next couple of chapters where we will talk about
demystifying traditional layouts as dictated by years and years of conventional
programming assumptions. 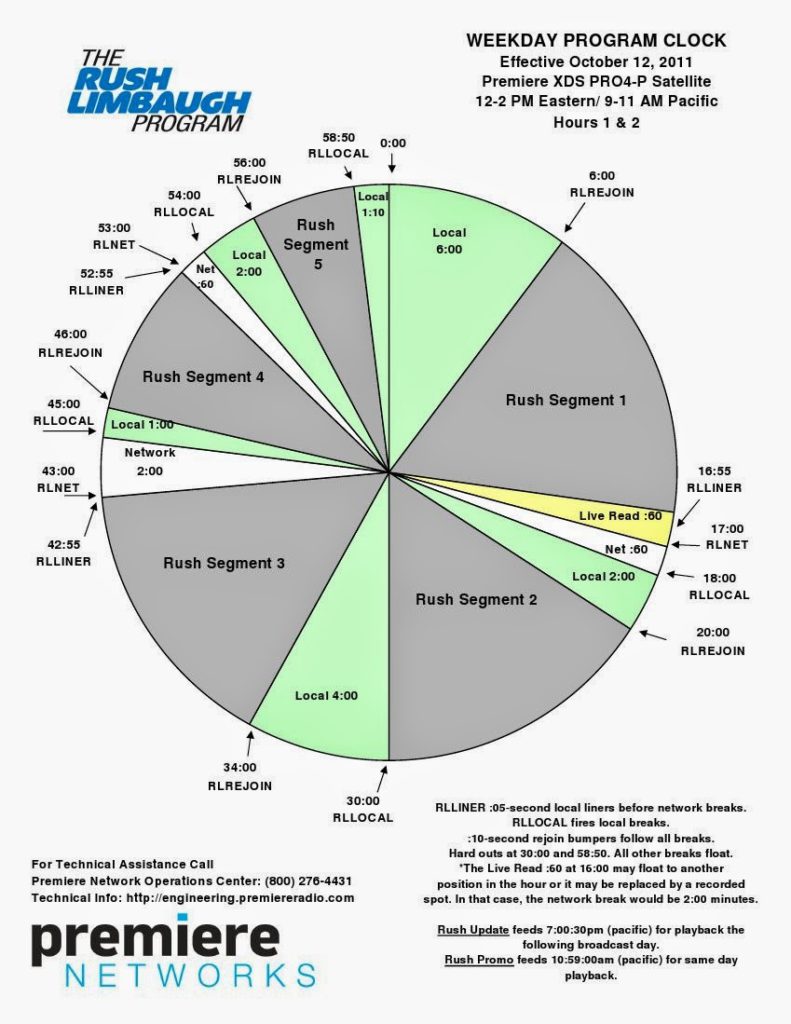 A word on mechanics

Discussing show
formatics across a station is not the aim of this section – but rather to understand
a generic approach to building your show hour by hour – no matter the time of
day, the amount of breaks, number of links or even the genre of show it is.
There are some
basics to show mechanics that one should know:
–
Each link should include at least two or
more of the following
o   Identifying
the station
o   Your name
o   The song
name (primarily in music radio)
o   A time
check
o   A throw
forward to what is coming up on the show
o   Revising
the middle of a certain feature being carried out at that time
–
One should never clash vocals at the end
or beginning of a link and a song/ad
–
Never go straight from a song into an
spot at the risk of having the advertiser being linked to the nature of the
song
–
In music radio – links should never be
longer than 2 ½ to 3min if it can be helped.
Many have the misconception that saying more makes for a “meatier”
link.  Not so, a lot can be said in 30
seconds.  In fact, all your ‘admin’ can be done in this or less –
leaving you with much time to build a slick personality-based link afterward.
–
The above also applies to talk
radio.  It is all built in the perception
of light and shade in what you are doing at any one point in the show.  Do not dwell too long on introducing a guest,
nor interviewing them after that, or talking to a caller thereafter.
–
Conversational
links are the way forward in making good radio.  Gone are the days when one would enjoy
listening to a cleanly cut “presenter’s” voice.
This also refers to the way in which you execute each link.  Whether you are doing admin or any other
content – a varied, natural approach is encouraged.
–
The flow of links within each hour of
show planning need to be ORGANIC.  By this I mean a logical flow of thoughts and
ideas by which you can engage your listener – both active and passive.  We often find that a “scatterbrained”
approach in show planning yields little to no listener interaction/response,
and an ultimate content fail.
–
A rule of thumb is:  execute a show the way you would any normal
conversation you have with a friend, family member, work colleague or stranger
on the street.  You will find your
listeners engaging you at higher volumes if you lead them step by step in your
thinking process.