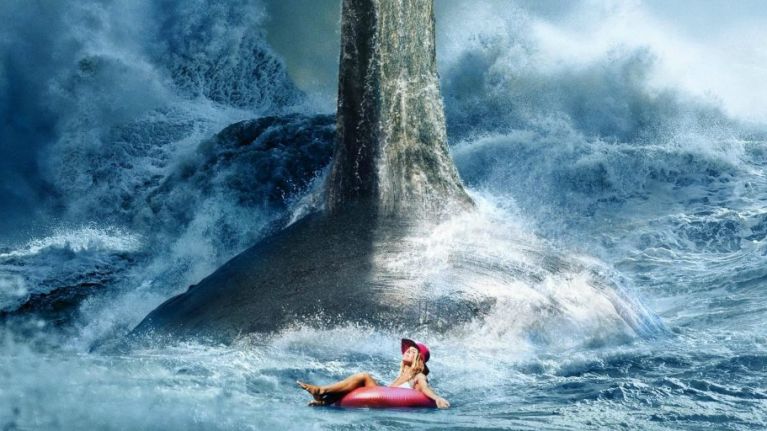 The Meg is a 2018 science fiction thriller film directed by Jon Turteltaub with a screenplay by Dean Georgaris, Jon Hoeber, and Erich Hoeber, loosely based on the 1997 book Meg: A Novel of Deep Terror by Steve Alten. The film stars Jason Statham, Li Bingbing, Rainn Wilson, Ruby Rose, Winston Chao, and Cliff Curtis. The film follows a group of scientists who encounter a 75-foot-long (23 m) megalodon shark while on a rescue mission at the floor of the Pacific Ocean.  And of course, many things go south from there on.

I loved this film.  One, the teasers for this film were released around a year and half before it’s actual release date.  So, I had been waiting a really long time to grab my popcorn and watch The Meg.  I am a big monster film fan – so this was right up my alley.  On a quick point, that also made me super-sensitive to whether the film would be done right?  And The Meg delivered on all my expectations.  Jason Statham is great.  Watching him in all his films as an action-hero, and now as an action-adventurer, he always gives an audience what they want.  Men want to be him, and women (and men) just plain, want him.  The cast had a cool dynamic. The action scenes are positively terrifying (in a good way).  You will cheer when the massive Megalodon takes a bite out of, well, anything and everything, that it can.  And there are some great mass casted scenes that will put Jaws back on the shelf and to shame.

When a film is released on circuit I always read, listen and watch the public’s reaction to watching it via a lot of social media platforms and forums that I belong to on the net.  It gives me a better idea as to being able to provide a more accurate review of a film, and not have it be a one-sided view, as most critics do.  Even though I thoroughly enjoyed watching this film over and over again, a couple of things did come up.

The first is that those of you that didn’t watch The Meg or won’t watch it – have no interest in a monster film.  It’s definitely a preference.  My sister is one of those people.  Most of the time I can convince her to watch a film – but she has done nothing but flat out refuse to watch this film.  It has nothing to do with a fear or phobia, it’s just not her type of thing.

Another is that those that did watch the film, felt like it was a basic idea with no real innovation to movie making.  But again, I say this quite often with action adventure films.  Are any of them vying for best picture at the Oscars? No.  They are here for pure entertainment.  There are, of course, many, many films in this genre that perpetuate a terrible script – but this film isn’t one of them.  It’s fun. It IS ,indeed basic. But The Meg is free from “cringe worthy” moments.  And that’s a big plus in my opinion.

The DVD release of The Meg includes a great bonus feature called “Chomp on This:  The Making of The Meg”.

Director John Turtletaub takes you behind the scenes in the making of the movie; why he chose to take on a monster film (something he has never done before); and what makes watching people on screen in absolute terror, so enthralling to an audience.

The feature also highlights how everyone, from the director to the stunt director – have nothing but great things to say about working with Jason Statham.   A credit to his name.  If it wasn’t true, I assume it would be just as easy to find a number of other things to put in the special features section.  It’s an honest running theme that he is a great guy!

And that does kind of justify a little as to why it is that we enjoy watching Statham in this, and all his other films.

Barrie M. Osborne, the films executive producer takes you on a play by play as to how the film was shot in the “middle” of the ocean with a skeleton crew and equipment.  This Is great to watch knowing we got some amazing scenes that Statham and the crew had to work well together to sell the believability of a giant prehistoric shark on the hunt for anything it can sink its teeth into it.  We also get to see how “water-acting” was accomplished and a glimpse into the swimming safety lessons that the cast had to take before getting into the water.

What is quite special to watch is child actor Sophia Cie with her experiences on the set and how she got along with the entire cast and crew.

The Meg is available now on DVD and Blu-Ray from Next Entertainment.