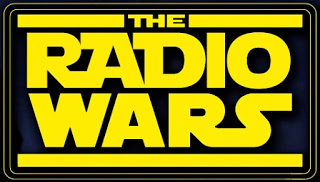 I read an article recently from WestWord online who interviewed Geoff Downes
regarding the origin of “Video Killed the Radio Star”.  It’s a great article.  I didn’t know that The Buggles became famous for not only the song, but that it too
was the first music video to be aired on MTV when that station went live on
August 1, 1981.

This got me thinking about a great war that began a long time ago, in a galaxy not too far away.


Radio versus Television, now that was messy.

Back in the 40’s.  I don’t know the
whole story, despite reading much of the literature around that era, but I
tried to personify the whole plot line.
So do forgive me for any artistic license used.

Picture it.  “A Golden Era of
radio”.  World Wars tearing the globe
apart.  Radio is a virtual hero of battle
in its own right as countries all over are using the medium to communicate the
status quo of literally what is happening play by play.  It’s relevant, reachable, and reliable.  Resilient too, I’d say.  By the time WWII had come to a devastating
end, the world was ready for reform.
Communication media had made its mark as not only a medium for survival
in a new global era – but also had found a space in people’s lives that
communicated a mirror of their life and style.
Print had found its role in effective community communication.  Threats (both military and media) – were practically
non-existent.

Ok, so Radio was good.  Really good.  Until….it happened.  (Let’s get to the personification part of
this).

The door to the Media Market swung open, by a very boastfully engineered fellow called Telecommunications
Media, who reached out to greet Radio for the first time and said

“I want to be the first to say
thank you.
Radio has been a voice, for all those around the world that had none.  One word.
War.  And as a result of war, countries now everywhere are
communicating at all hours to all people about all things.
Radio is the future.  Well, that is to
say the future would not be possible without Radio.

So again, it’s a pleasure to meet you.  I am that communication future.  But everyone soon will just call me,
Television.”

Radio was in deep trouble.

TV matched everything radio could do, but added
live pictures to it.   Cut to the
end…without me stating the obvious, radio survived.  And it still does.

For all the television, or live-action “visually stimulating
media” –  that does have the
potential to blow our “orgasmic optical sensors” –  radio must first thank TV for every “level up”
we have made in response to what we cannot literally offer an audience from a
platform perspective.

Our industry went from one immaculate milestone to another.

Not only have we, but we can, only build the craft stronger.
Radio I can say with confidence, has still, a good couple of revolutionary steps
ahead.

However, let’s put on our helmets
and go to war.  Because we are already at battle with a number of
threats to our survival.  Relax.  Don’t do it.
Panic, that is.

Building an hour long “best of Britney playlist” with Spotify,
will yes, ring no threat to radio and it’s “relevance” now or in the
near future.  As long as are looking at
the “Why?”, and not the “What”.

The media race/chase enters new competitors all the time.  Some will provide a product that will affect
those of us that are already running.  As
long as you stay in your lane, your focus is exactly where it needs to be.

How do you stay in line?  Well, keep
doing what you do best.  In radio, that is to supply,
not just any, but the definitive needs of our audience.  Those needs that do, and will still find being
filled – turning on the radio.

Quickly, try the following exercise.
It will help in contextualizing the following question:  Is it radio, or the radio you make – that is
at real risk?

1.
Get “Spotify”-ied if it’s your first time using
the service.  Register, verify, login –
get past all the red tape.
2.
Scan, study and mentally store any functional aspect in
Spotify that covers what it can do and how (you can use what) to do it.
3.
Embrace (even if you are resistant at first) all the
proposed benefits of using the service.
Take note of all pro’s and con’s.
4.
Spotify away.

For Spotify‘s sake, I hope they delivered to your expectation. That is a
fair amount of effort you just exerted in doing something.  The end goal being that before you exit
Spotify, you will join the millions who have committed to what the Spotify
“experience” has to offer.  And
by the looks of things, it gets the job done right.  Facts don’t lie.  Close to 100 million people are now
actively using the service and they haven’t shown much let-up yet.

Switching on the radio is really simple, familiar, it is an “all access”
medium available all the time, anytime.  It
also takes exactly “now” seconds to make the choice actionable.

So let’s get back to that Spotify-built list “Best of Britney”.  As the saying goes, “haters will hate”, and
if you do (hate that is), perhaps it is a good idea to take a step back and evaluate
why you as a broadcaster are casting fear in intimidation towards digital
services and new media communication platforms that are “stealing” your
listeners away from you.

The truth is, there is no hope.  No
hope for any radio station that leaves a listener with an empty need sought
through its definitive service.  For
every “now” moment you hit a miss with your listener, you have every right to
lose them to another choice of media.  Even if
it takes that listener a whole lot of effort to get through the “red tape” and
enjoy the benefits of coming out the other side.

So you become obsolete.  Unlike radio
as an industry, who has been doing everything but becoming obsolete – even in
the face of our biggest threat, television, decades, and decades back.  You, and the radio you do, becomes obsolete.

Beyoncé said it best.  Everything you
own, it’s in the box to the left.

Radio is the actual (and original diva) of our media family.

The medium has aged really well, it is humble, and is “media-confident”.  We are the only medium that 24/7/365 has a
direct, real time, and live line of dual communication with our audience, at
any one second, anywhere around the planet.

Our next generation of communication kids YouTube, Facebook, Instagram,
SoundCloud Twitter, Feedly, Blogger, LinkedIn, Mashable, Hootsuite and the long
list of so many more too long to mention – are here, and want to play nice.  By embracing the media family around us, whilst
staying true to what we do – is how we as radio, will survive war against the
world.

After all, we’ve done it before,
right?

We are the voice.  Try understand it.