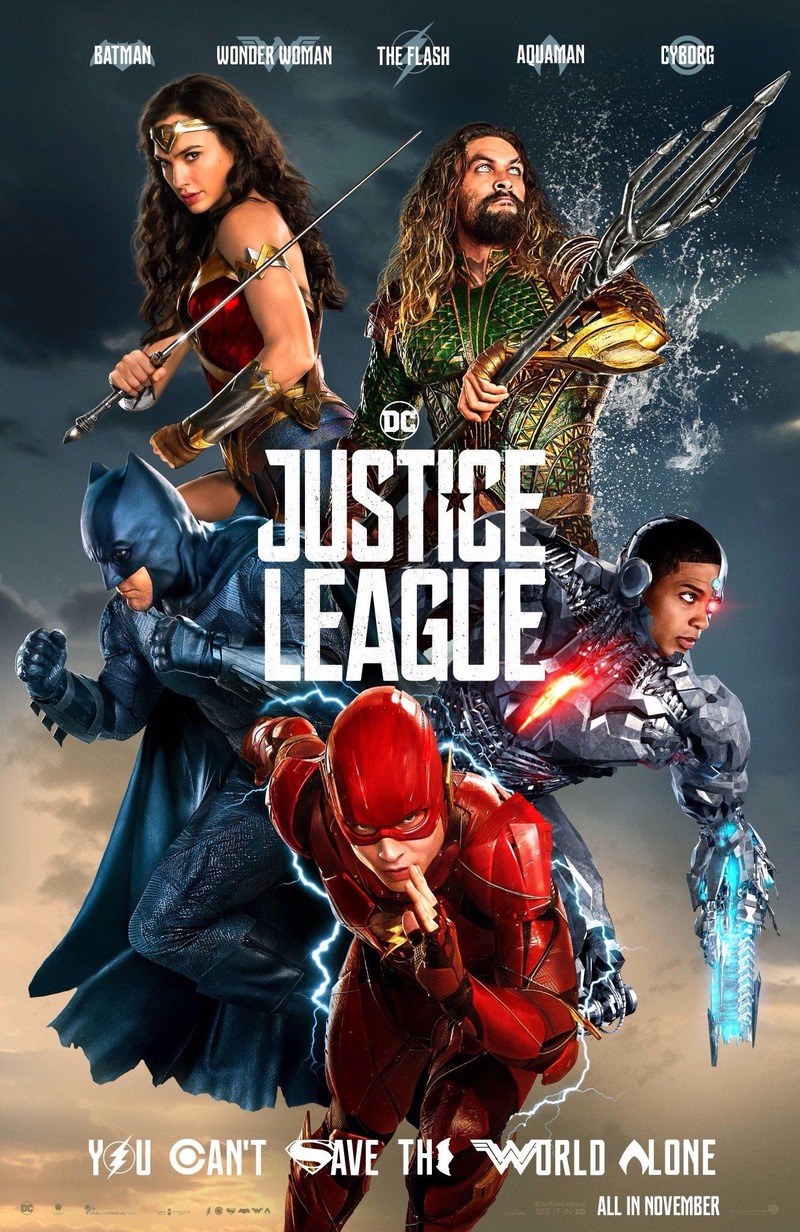 THE LOW DOWN
After the death of Superman at the hands of Doomsday, Batman and Wonder Woman are faced with a new global danger – the arrival of supervillain Steppenwolf, who seeks to bring the ultimate weapon of power together and reclaim his dominion over all sects of the earth’s inhabitants. By that I mean, man, the Atlanteans and the Amazons – who together five thousand years ago had bested Steppenwolf before. But this time it’s different. Earth is in disarray. People are not united. The Atlanteans are an isolated civilisation buried deep under sea, and the Amazons are sworn to never involve themselves with the concerns of the rest of mankind. As Steppenwolf builds his army of destruction, only a small band of superheroes that have nothing in common, except a common good – are the world’s one hope.

THE GOOD
As with any ensemble superhero films, firstly, the fact that we get to see a band of our beloved heroes in one film is always (not sometimes, but always) a great thing. After the massive success of Wonder Woman, the incredibly long running and strong Batman franchise, and of course, Superman being rebooted a number of times with Henry Cavill taking lead in the past couple of films – fans can at least know and expect great satisfaction from the film before it even begins. Topping it off with the introduction of 3 more iconic heroes (Aquaman, The Flash, and Cyborg), which were teased provocatively in “Batman vs Superman” – only makes the film that much more enjoyable. Let’s take it further. The performances are all convincing. In fact, I think that Superman was featured less actually worked to the advantage of the film, while building relationships between the other characters coming into our lives for the first time. On that note, I quite enjoyed seeing Superman for a glimpse at a “badass” level. Want to know what I mean? Watch the movie. The inclusion of Alfred (played brilliantly by Jeremy Irons) was also a highlight in the film.

THE BAD
I suppose this part might come off a little biased, as I am first and foremost a Marvel fan before a DC fan. And I mentioned that only to admit that I am not that learned with the DCU. So, choosing to make Steppenwolf as the film’s villain was a bit of a let-down. Again, I say this only because after watching “Batman and Superman”, with Doomsday being the climatic villain-crush, I expected the Justice League would take on a big rival – as in Darkseid. Although this is probably the plan in upcoming films, it feels like the fans were expecting one thing, and got another. Okay, so to be fair: I went to then do some research on Steppenwolf, just to see whether that was a fair statement to make.

Well. I was wrong. Happily, so. Steppenwolf was quite the “badass” himself. He is in fact the uncle of Darkseid (amongst other cool things), and made his comic debut in New Gods #7 in 1972. Just a little bit of a background for a bit of context. He is a member of the Darkseid elite, his superpowers (as a supervillain) include immortality, superhuman strength, speed, and durability. This probably explains one another “low point” in the film which is, how the Justice League defeat him? It kind of left me wanting more. And was almost an easy win for our band of heroes.

If I had to nit-pick at the film then (as with all ensemble films) – the storylines for each character are not well developed, but that is always the problem with big characters, and a limited running time of film production. So, the full backstory to The Flash, Aquaman and Cyborg will have to wait until individual films for each character are released. With Aquaman released later this year, we are already waiting in anticipation for what DC holds for the rippling muscled Atlantean.

THE CHERRY ON TOP
Special features on the DVD include “The Road to Justice” is a great 13 minute behind the scenes bonus which features the story to how the Justice League film came to be. Comic artist Jim Lee and Marv Wolfman (writer, “Crisis on the infinite earths”) are great additions to explaining the rich context of the multiverse DCU. Grant Morrison (writer of JLA) speaks of his love and inspiration for the story through the ages and how he was inspired to follow the almost “soap opera” like addiction to another and another and another story. He adds that stories became so beautifully intricate and the adventures were unique and bombastically huge. Getting the heroes together had to have as much purpose as why there should be a villain big enough to bring them together in the first place, as was done in the JLA comics in the 1990’s. This was the inspiration to moving to why the first supervillain should come from the “gods”- enter Steppenwolf. And the JL film was born.

Justice League is available now on DVD from Next Entertainment. For other exciting reviews, check them out on Facebook.