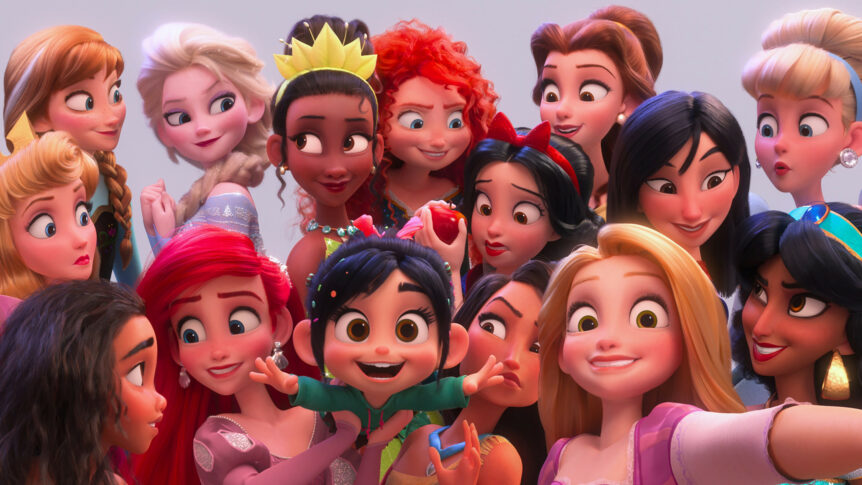 I am a massive Disney fan.  I have been since I was 4 years old.  Staunch, and proud of it.  Disney is currently one of the pioneers in the foreground of humanity’s diverse representation.  The cry for this has been evident in the world around us, and Disney steps up every single time (again I might be slightly biased).

But a biased opinion doesn’t come close to the overflow of facts that make this statement true.

Let’s take a quick moment to see how Disney heroines in the past, called on for an immediate change in representation.

Granted, Disney princesses have not always been key role models for young girls, with most of them setting unrealistic expectations for how women should live their lives, or their plots being guided by the male gaze.

It’s hard not to cringe watching the 1950s Cinderella and Sleeping Beauty today as they yearn for a prince to save them from a cursed life, or at the fact that Ariel gives up her talent and her literal voice in The Little Mermaid just so that she can find happiness with a man she barely knows.

But look at Princess Leia from the Star Wars franchise.  In the 70s a woman with no super strength, superpower, or Jedi calling, did not stop her from being the lead for the galaxy rebellion.  So the hope was well bloomed, even back then.

A not-so-fun fact is, however, like Princess Leia, other female leads like Wonder Woman, and Black Widow, never sold well on toy shelves, as they were never stars of any commercial product role being sold to young girls.  These young girls, through limited brainwashing and limited commercially accepted exposure, still even to this day, somehow strive to be Batman or Spiderman.

Pocahontas (though not as popular with the kids as film) was legitimately the first Disney Princess to pioneer strong female representation in leading the end of racial discrimination and war.

Looking at Disney princesses today, however, whether they’re new princesses or remakes of originals, the voices of women are more prominent and their needs are being better prioritized in storylines. Watching these princesses proves a more thoughtful and nuanced experience, and you’re now far more likely to walk away with a lesson you can apply to your own life.

These are according to Global Citizen, the most empowered Disney Princesses :

Take the time to plan out your dreams

The easiest lesson to take away from The Princess and the Frog is that your goals can be achieved through hard work, which of course will always be a great lesson for every young girl to learn. More than that, however, Princess Tiana doesn’t just work hard, she plans hard.

Her plans for the future are clear from the beginning and because of that, no matter what hiccups she faces on the way, she knows exactly what she’s working towards and what she needs in order to get there.

Her dream is to own a successful restaurant, and she plans it to a T. Princess Tiana knows the food she’ll serve, has a clear idea of the look of her restaurant and has even assessed what she’d need to get her business off the ground. In this movie, Disney has given a digestible glimpse into what it takes to start a business from the ground up, an important message for all those aspiring entrepreneurs out there.

Born into a life of royalty, Merida needs to marry someone before she can be allowed to run the kingdom, but the young princess has bigger plans for herself and isn’t about to let age-old rituals guide her destiny.

Much to her mother’s disapproval, Merida is determined to prove that not only is she not ready to wed, but she’s capable of being a leader without a husband by her side and without having to change her “tomboyish” mannerisms. Who can forget that empowering scene where she completely annihilates her suitors in an archery competition in the fight for her own hand in marriage?

Rushing through the woods with a bow and arrow at the ready, Merida redefines what it means to look, act, and lead like a princess.

If you’re determined, you really can do anything you set your mind to

There are so many incredible lessons throughout Mulan it’s hard to choose just one —  but Mulan’s determination to fight for something bigger than herself can’t be ignored.

It’s hard to watch Mulan in the “I’ll Make a Man Out of You” montage scene, seeing her pick herself up and get back to training time and time again, and not cheer for her eventual success.

She’s so hungrily determined to prove herself, that even when she falls or makes a fool of herself, she continues trying and working to be better.

And it pays off, with Mulan proving she’s a more than worthy fighter and gaining the respect of the emperor, her country, and her family — all while sticking to who she is and what she believes in.

Moana knows that she should remain on her island as her father prepares her to be the next leader of the tribe, but deep in her heart she knows there’s a mission waiting for her — one that could change her life and the lives of everyone on the island.

When she follows her instincts to go out on the water in search of a better future for the island, she knows every step of the way that it’s the right thing to do, despite being told otherwise by her father. It’s a dilemma many women are faced with: to listen to their instincts or follow what they’re told to do.

Moana never apologizes for following her instincts and listening to her heart, and that’s a vital lesson for all women.

Disney’s latest princess is incredibly relatable on her mountain of a mission to take back the kingdom from dark forces, and unite the separated regions of the land.

She openly admits when she is wrong, she never leaves anyone behind, and she learns that there’s strength in teamwork. While all of these are fantastic lessons to learn, the biggest one for us (inspired by a quote attributed to Nelson Mandela) is that “it always seems impossible until it’s done.”

Raya’s mission seems far out of reach, right down to the last few minutes of the film, and the characters around her aren’t shy in telling her so. Despite the challenge, however, she keeps looking for answers and, with teamwork and determination, she achieves the “unachievable goal” of dispelling darkness and uniting the kingdom.

Hold on to what you want

Camila Cabello’s take on Cinderella has been highly anticipated since it was announced two years ago, and just by watching the trailer, you know immediately that this isn’t your ordinary Cinderella tale.

She’s quick-witted and passionate and is determined to build a better life for herself by following her dreams as a dressmaker. It seems from the trailer that she’s heading to the ball, not to attract the prince, but to showcase her dress designs and put herself on the map as a designer.

When the prince lets her know that he chooses her to be his princess, she holds on to the business she believes in and responds by saying: “What about my work… I don’t want a life stuck waving from a royal box.”

Know your worth, and be ready to speak up for yourself

Can we just acknowledge that Jasmine has arguably one of the most adventurous storylines among Disney princesses? She’s best friends with a tiger, gets to meet a magic genie, flies around the world on a magic carpet, and on top of that, she has impeccable style.

Now that we’re all on the same page about Jasmine, the 2019 remake of Aladdin really amplifies the princess’ voice as someone who knows her worth and wants to be heard. Her determination to be taken seriously as a female leader is evident in the song “Speechless.”

In the song, she acknowledges that her views are often brushed to the side and that she’s seen as someone who is incapable of leading her own life. The lyrics are powerful in communicating that despite this, she will always speak up.

“I won’t be silenced, you can’t keep me quiet,” she sings. “Won’t tremble when you try it, all I know is I won’t go speechless.”

8. All the Disney Princesses

Take action for what you believe in

It’s easy to settle into a world that is not designed for you, falling into the background as you’re continuously told what to do, and letting others take the reins on the direction of your life. This is especially true for women and girls, being brought up to believe that they’re not enough, or that it’s not their place to have a voice, or that they don’t deserve a bright future. What all these modern Disney princesses have in common is that they stand firm in what they believe, no matter the odds against them.

They don’t just wish for change, they act for it, harnessing the power that every girl possesses.

You too can step up and act, to help make sure that women and girls everywhere have the tools to harness the power within them and thrive, by taking action with us here to call for gender equality.