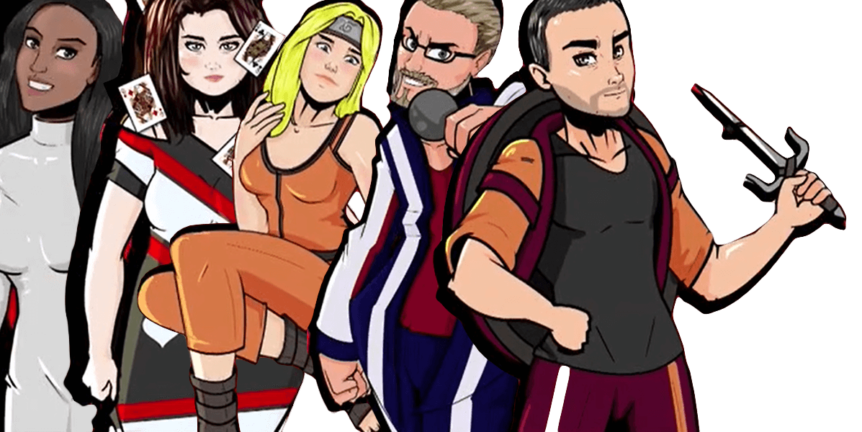 Comic Book Karaoke is the narrative of geek and fandom culture in a socio-political space that has fresh and new conversations. Chris Jordan hosts a variety of super-geeks and friends of the show through woman empowerment, LGBT representation, eccentric collecting, and diversity in pop culture representation.

In the pilot episode of CBK, we turn conversations around the purity of fandom to its side and upside down. Fan culture, or fandom, is a term that describes communities built around a shared enjoyment of an aspect of popular culture, such as books, movies, TV shows, bands, sports or sports teams, etc. Fan cultures are examples of participatory cultures. Cosplayer and Super-Geek Michelle Huxtable (follow her on Instagram @mitchie8888) takes us through the “rights” to gatekeeping, we throwback to a moment Stan Lee, I attempt to cycle back to the purity of childhood fantasy enjoyment with my 6-year-old nephew, and we end off with the first of our Man Cave Invasions – my own. In our CBK Milestone Moment, we dive into The Age of Apocalypse.

Females are more often portrayed as helpless or as victims than males (Aubrey & Harrison, 2004; Dietz, 1998; Miller & Summers, 2007; Thompson & Zerbinos, 1997). Also, in cartoons, females are depicted as more emotional and superficial or more likely to get overexcited in a crisis than males (Baker & Raney, 2007).

THIS is why we need to have this conversation. With female representation in 2022 reaching an all-time low within DC lead space and with women even a little confused as to what extreme should and should not be portrayed by their female comic counterparts – where exactly is the race for female representation in comic book culture. Joined by actress Michelle Ayden (follow her on Instagram @mishmerizer), let’s chat about the woman we have had fighting the good fight in Princess Lea and Wonder Woman. We also touch base with one of our Original Gangstas Justin Render (illustrator, graphic designer, and writer for CBR), our milestone moment focus is on the Scarlett With destroying 90% of mutant-kind, and we touch a throwback to JRR Tolkein. We Man Cave Invade Adam Barker and his amazing, humongous collection of MOTU, TMNT, Star Wars, Biker Mice from Mars, and a whole lot more.

LGBT themes in comics are a relatively new concept, as lesbian, gay, bisexual, and transgender (LGBT) themes and characters were historically omitted from the content of comic books and their comic strip predecessors due to anti-gay censorship. LGBT existence was included only via innuendo, subtext, and inference.

What to do to tread new lines while opening our minds to the world of LGBT representation. With the assistance and now as tradition dictates, Drag Mother Kylie Cox assists in my transformation into Poison Ivy. We talk about conflict within the community, and a damper on the immaculate history of LGBT rights in South Africa. We turn to podcast influencer Waseem Imam Saheb from the Roti Riot to further the conversation around why sexual dictation is so prevalent in LGBT comic book culture. Our milestone moment hits back to the same-sex marriage of Northstar, and we have an amazing CBK throwback with the man, the legend – Jack Kirby.

An eclectic collection of objects, ideas, or beliefs is wide-ranging and comes from many different sources. What is a world without a bit of everything, anything and everyone? To celebrate the art of eclectic collecting, we introduce Jonathan Harding from Fandom is Awesome

Jonathan takes us through why eclectic collecting takes a far side of tolerance from other mainstream collectors. Why the “outside world” from LARP players, cosplayers, collectors, and others stereotype down to a 1950s mindset. But is the world of fandom increasing exponentially, and the world just needs to catch up? Well, I also chat to eccentric collector Jean-Pierre Ford about his large sticker book collection but also his rare, vintage, and class A collectibles, we have a CBK throwback to TMNT creators Peter Laird and Kevin Eastman and celebrate a CBK milestone moment in the (first) Death of Superman.

Oh, and not to forget. A “Speech Bubble” with my 6-year-old nephew Jordan where we talk tolerance and celebration in uniqueness.

Go look up any statistic around diverse representation. The shock value doesn’t come close to what you will find in a daily tabloid. In this episode, I am joined by Instagram Influencer and budding podcaster Theri Morulane, who also wrote a dissertation on Black Representation in the Media (follow her @woke_queen on Instagram). Where does “white guilt” start and stop, and where does the understanding of #BlackLivesMatter as an ongoing movement (and not a trending hashtag) become a part of everyday lifestyle. We also dive into a one-on-on with Ziyaad Rahmed from Awali Comics who developed the Siri Watu Manga comic book series, and our CBK milestone moment is the introduction of the Black Panther in Fantastic Four 52. We also stopped by Jordan for a “Speech Bubble” on bullying and a CBK throwback to Sir Alec Guinness from Star Wars fame.

In the final episode of season 1, Comic Book Karaoke we take it back home to local artists, and local support. Why is it that local support dwindles in comparison with its bigger brothers around the world? Jonathan Harding joins me again in a conversation around legitimate money that should be spent, and whether “influencers” are wannabe’s and self-proclaimed, or are they misunderstood as flag flyers for the community?

I go on a trip down memory lane with my visits to GeekFest and a meet with Timeless Board Games, our CBK throwback is a very young Stan Lee explaining the relevance of Spider-Man in everybody’s lives. We end off with our milestone moment in “The First Snap” of Infinity War, and one hell of a Man Cave Invasion with Joe Recondo Rondeau sporting a collection like you’ve never seen before.