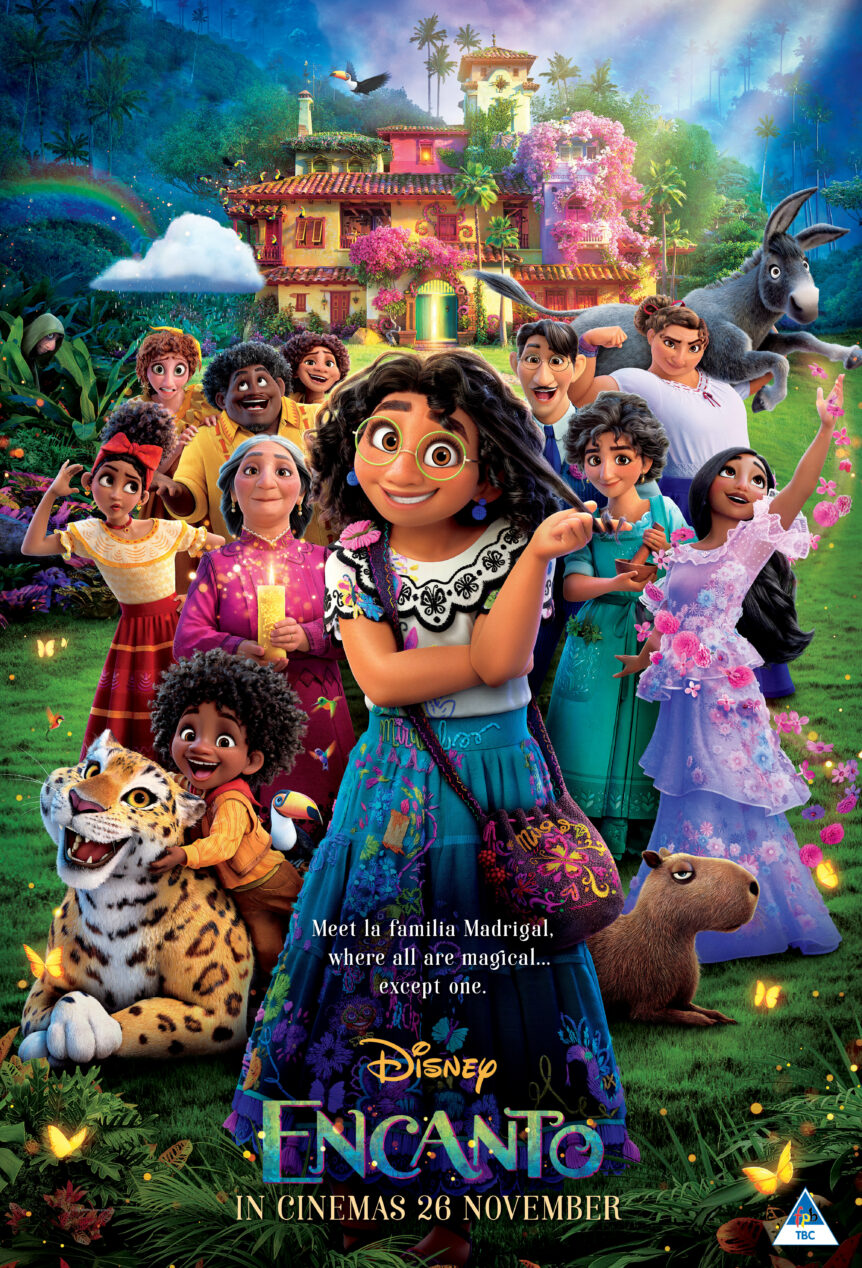 Listen to the review here

Encanto is a musical breath of fresh air that we all need as we push through the last stretch of 2021.

In November 2016, Lin-Manuel Miranda revealed that John Lasseter, the then-chief creative officer of Walt Disney Animation Studios, had presented an idea for an animated project to himself and Byron Howard, while promoting his previous collaboration with the studio, 2016’s Moana.

Miranda said work on the project had begun but was at an early stage.

On January 29, 2020, it was reported the studios were developing an animated film centered on a Latino family. Howard and Jared Bush were announced as the film’s directors, with Bush being involved with the film’s screenplay, while Clark Spencer and Yvett Merino were named as the film’s producers.

On June 18, 2020, the tentative title was revealed to be Encanto. The project was also confirmed to be the film Miranda was involved in, and it was reported to be about a girl in a magical family.

While initial reports had said the film would be set in Brazil, Miranda stated on June 22 that it would actually be set in Colombia.

The same day, it was also reported that Charise Castro Smith would be a co-director in addition to co-writing the screenplay.

By June 2020, Miranda had begun writing the film’s music, which will have eight original songs in both Spanish and English. On September 8, 2021, Germaine Franco, co-composer of the songs from Coco, began to score the film.

Stephanie Beatriz as Mirabel Madrigal, the lead protagonist who does not have a special gift and is described as “imperfect, weird, and quirky, but also deeply emotional and incredibly empathetic”.

John Leguizamo as Bruno Madrigal, Mirabel’s excluded uncle who has the ability to see the future.

Off the bat, I loved this movie.  Disclaimer.  It is a full-on musical.  So if you’re not in the mood for one, don’t watch it.  Very much in the style of 2021’s earlier release Vivo, Encanto unlike Vivo, gets the full package correctly put together.  Where the theatrical broadway execution of Vivo was immediately exhausting – and I think it’s mostly attributed to how I personally did not like the voice actor of Vivo who just wasn’t a great match.  Encanto, is different. The 90 minutes snapped by. The rich and enigmatic flavour of Colombian culture is warm, inviting, and just an absolute pleasure to always consume.

The latest addition to the Disney-heroine canon is Mirabel Madrigal (a spirited Stephanie Beatriz) who fits neatly alongside Moana, Anna, and Raya — sweet, sardonic, and ready to chase down her destiny. Except, Mirabel’s purpose is unclear. Everyone else in her family has been granted magic powers (from typical X-Men fare like weather control to more idiosyncratic abilities: Mirabel’s mother makes food that literally heals you when eaten) by the same mysterious force that erected their enchanted home.

But when the time came for Mirabel to receive her ‘gift’, she got nothing, forced to swallow her disappointment while her family flourished around her. Instead of a quest narrative that sends Mirabel out into the world, Encanto is a mystery that sends her further into the hidden secrets of her own home. Can she work out the part she’ll play in the Madrigal destiny, reconnect with clairvoyant black sheep Bruno (John Leguizamo), and discover why she’s seeing cracks in the casa walls that nobody else can see? Mirabel’s journey plays out with nuance, confronting Abuela’s (María Cecilia Botero) tragic past and need for tradition at the expense of progress, while facing up to the strained relationships with her empowered sisters — super-strong Luisa (Jessica Darrow, a standout) and ever-perfect Isabela (Diane Guerrero) — that require repair. The characters are well-drawn — though the lack of a sidekick like Maui or Olaf feels like a missed opportunity.

So.  Encanto is superb.  Being hailed as the best Disney/Pixar release since Moana.  It’s a film you’re going to want to watch over and over and over again.  And that’s perfect for a little joy as we enter the festive season.

Encanto focuses on the miracle of belonging, purpose, and family.  We all need more of that. To look around, have the vulnerability of Mirabel, but also the need and want to be here for ourselves and those around us with reason.